No rush for the Terminator anymore 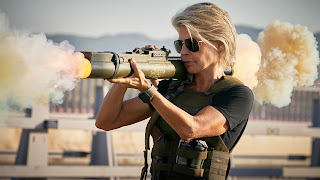 There aren't going to be any movies in the theatre for anybody for a while yet, but that hasn't made much difference to me, and I've finally learned a little bit of cinema patience.

I used to go to the cinema at least two or three times a week, and would see anything, anytime, but I haven't been to the movies much lately, mainly due to newfound parenthood. Apart from one brief 72-hour burst a few months ago, where I saw 1917, the new Star Wars and Knives Out all at once, it's been a film drought, and those three movies were legitimately half the films I've seen in the cinema in the past nine months.

And once I broke that habit of going to the theatre, I found it easier and easier to just hold off, even on films I'm fairly keen to see.

I haven't bothered seeing Jojo Rabbit, even though I think Taika Waititi's films have always been brilliant, I still haven't seen Joker (although I was never really that keen, to be honest), and never bothered with the new Terminator - the first in that series that I haven't seen on the big screen.

I do genuinely think the best way to see movies is in the theatre, with the giant screen and the sound booming across a vast interior and the crowd reacting in real time. There has never been any kind of home set-up that can match that thrill. And I'm still keen as fuck to see the new James Bond at the movies, because I'm always keen as fuck for the new James Bond.

But life is so busy, and there are other priorities, and I've finally learned to wait for the latest movies. They'll still be there, whenever I'm ready.
Posted by Bob Temuka at 4:42 PM