The Valachi Papers: This is no Godfather 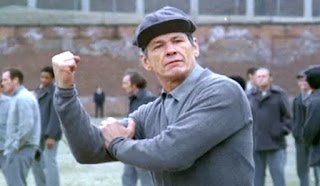 It's a little mind-bending to see that The Valachi Papers came out the same year as The Godfather. They're superficially similar, with a focus on mafia violence and loyalty that stretches over decades, but couldn't be more different in almost every other way.

The Godfather goes deeper, and is just so much richer in style and theme. It's beautifully shot, while The Valachi Papers is filmed on obvious sets with the flattest of lighting, and while Charles Bronson has always had an incredibly blunt charm, he can't match the gorgeous performances from Pacino, Brando, Cazale, Duvall and Keaton.

Even with James Caan getting riddled by every bullet in creation in The Godfather, The Valachi Papers manages to hold its own when it comes to the violence, and even has a body count that outdoes Coppola's epic. But by all other measures, The Valachi Papers is a minor movie, while its gangster counterpart looks like the future of film. Timing is everything, but it didn't do Bronson's films any favours.
Posted by Bob Temuka at 7:21 PM