Dicks: Here I am, whinin' on 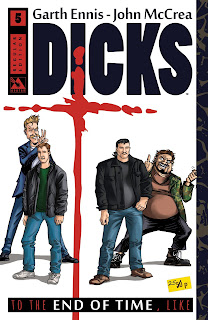 A lot of comic writers and artists are embarrassed by their earliest efforts, but few of them hate them as gleefully as Garth Ennis does.

Ennis was still a teenager when he broke into comics with Troubled Souls. With watercolour art from John Mcrea, it's a comic about the troubles in Ireland and a young man caught up in the middle of it. And while it wasn't as bad as Ennis now makes out - there is a nice bit where the two main characters put aside all their differences over a pint or two, and sets the template for 90 percent of everything Ennis tries to say in his comics -  it was definitely clumsy and overwrought and tried way too hard.

Ennis ended up writing a Judge Dredd story just to get the rights back to the comic, to ensure it would never be reprinted, and he also wanted the rights so he could get Dougie and Ivor, the main characters in his irreverent Dicks comics. As much as he hates Troubled Souls, he loves these bloody idjits, and made his feelings about his earliest work clear in the 2014 Dicks series To The End Of Time.

There, Dougie and Ivor, who are blundering through the cosmos in a time machine, smash into Tom, the main character from Troubled Souls, right at the start of his story, and smear his bloody guts all over their time machine. After opening that issue with a page of Ennis ripping into his own earlier writing style, he literally rips into the main character, and even takes a literary dump on the ending of the story by implying that Tom was fucked anyway, because he fell off a boat and drowned 10 seconds after Troubled Souls ended.

To see someone take a gleeful shit on their own comics history is always good for a laugh, and while you would have to hunt down an ancient copy of Troubled Souls to ever read it again, Ennis makes it clear that you probably shouldn't fuckin' bother.
Posted by Bob Temuka at 6:58 PM