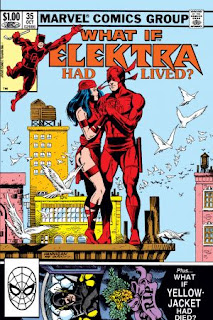 It sometimes felt like the stories in Marvel's What If... comics were always destined to end badly. After all, you can get away with a tragedy that would never stick in the proper continuity, and when the heroes go on and on and on, it can be a genuine novelty to see them have a tragic ending for once.

But sometimes, things turned out much better for everyone concerned, like in the What If Elektra Had Lived story from #35, written and drawn by Frank Miller.

It's a very Miller comic, and not just because the Watcher is pontificating in the rain in a trenchcoat - the story is heavy on mood and style, rather than plot, and the actual events after Elektra survives her fatal fight with Bullseye is just a few pages long.

But it also has something that you don't often find in Miller's comics, or in What Ifs -  an actual happy ending, with the two lovers heading off into the sunset together. They don't seek vengeance or justice or anything like that, they get to leave the superhero life behind.

Of course, this is one of those What Ifs where it actually came true in the end and Elektra did survive, and the story of that is a lot longer and way more complicated than this short tale promises, and is still shuddering along, all these years later.

But it's nice to know that there is a world, somewhere out there, where they do just walk away from the crime and ninjas and the endless violence, and actually find some goddamn peace.