The comics of Richard Sala: Spooky, nasty and totally cute 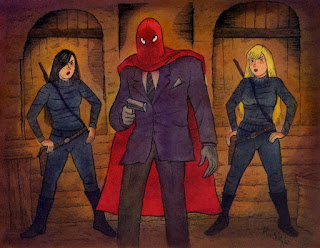 I've had the extreme fortune of browsing through the stacks at the famed City Lights Books in San Francisco twice, checking out the books in a vital part of the city where the beats once ruled, but the only book I actually bought from that shop was a Richard Sala comic.

Sala passed away last week and was still producing some terrific comics, right until the end. For the past few years, he was regularly posting serialised comics on his blog, before collecting them in books, and getting a dash of new Sala art every week was always a delight.

His earliest stuff was crude and dark and mean, but his later works always looked colourful and bright, with people who had cute button eyes and noses and curvy limbs. And then terrible things would happen to them, and monsters would start stabbing them in those cute little faces, and the bleakness would shine through.

Sometimes the carnage was totally justified, with fat cats meeting richly-deserved ends, and sometimes he just liked to have innocents stumble into the horror. But it was all done with a wink and a grin, and was always eminently readable.

I'm still checking his blog every day, just like I have been for the past five years, vainly hoping that it's all just another cruel joke, and that he has more art to show off. At least I've still got the books that I got from City Lights and other bookstores, all over the world. There is always a place for Richard Sala on my bookshelves, because I'll always love that nasty cuteness.
Posted by Bob Temuka at 4:35 PM