Wasteland: It's weird down here! 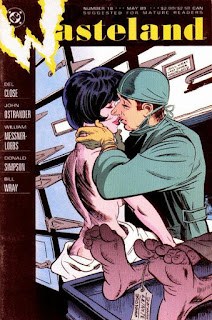 Of all the strange comics DC published in the 1980s - and there was an admirable amount of them - Wasteland was the strangest. Writers John Ostrander and Del Close would tell short stories of creepy horror, or vaguely autobiographical stories of Close's life, or just anything that took their fancy. It sometimes went to bizarre places, but it always looked good, with gorgeous art by the likes of David Lloyd, Joe Orlando and George Freeman.

It somehow lasted 18 issues, but they saved some of the most batshit weirdness for the final issue. Beneath a stunningly tasteless cover from Bill Wray, it's a full-length story that starts with the return of a dead detective - last seen in an earlier issue, looking on bemused with a bullet hole in his head as the world blew up around him - and skewing into a semi-sequel to a story about the creators trying to figure out how to staple the comic into a typical DC crossover.

It's an incredibly bizarre comic, even for Wasteland, summing up everything that was attractive about this idiosyncratic title. Despite my pathetic efforts, it can't be summed up with an easy synopsis, and the insanity must be seen for itself. When so many comics follow an easy formula, and entire storylines can be easily predicted, right from the start, Wastelqand deserves some credit for never being that predictable, and for going to places other comic creators would never think to go.

The final story doesn't make any sense, of course, but Wasteland never had any interest in making sense, and maintained that philosophy until the very end. Making sense never mattered so little.