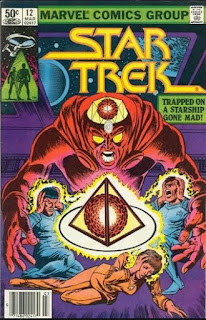 Marvel had the right to publish Star Trek comics in the short period before the first and second movies, before DC got the license, but their comics have dated a lot more than their distinguished competition's efforts have, because they're just so cramped.

Marvel's version of Star Trek was still full of bonkers ideas, and #12 has Janice Rand marrying an energy ball in a pyramid and heading off to the void between galaxies with him (unsurprisingly, it doesn't end well for anybody).

There is certainly some ambition there, and the Marvel era did have some great artists on the book, including the likes of Dave Cockrum and Gil Kane. But it's also so cramped, and so overwritten, and so typical for Marvel style of the period, where the captions and dialogue overloaded the art, as the scriptwriters grasp for profundity with some very big writing, which comes at the unfortunate expense of the visuals.

When DC got their hands on the Enterprise and its crew, the comics had more great art, usually from the criminally under-rated Tom Sutton, but it was also so much more open and inviting. Star Trek might be set in the vacuum of space, but it turns out it still needs a lot of room to breathe.