A blurb on Boy 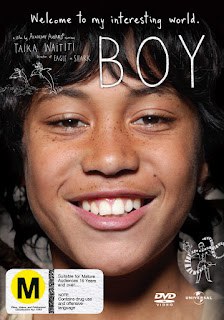 Even though I was always convinced it would be a dream to regularly review movies, my career as a part-time film critic only lasted a couple of years. I did some stuff for the local newspaper I started out on, and then bits and pieces for larger publications after that, but I had to quit after a while.

I just found it wasn't as fun as I thought it would be, and I'd spend so much time sitting in the theatre thinking of a clever intro instead of actually watching the movie. I found I just couldn't mix work and hobbies, and resolved to keep them two distinct things, because you don't want to tarnish one with the other. Now I deal with regular hard news in the day job, and save the bullshit for this blog.

But it was fun for a while. Even though a lot of the mid-2000s films were awfully average, I did love to write about movies like Kung Fu Hustle and The Three Burials of Melquiades Estrada and The Lives Of Others and In The Loop, and help expose those kinds of films to people who normally wouldn't be interested.

I've still got some of those reviews filed away in my rapidly yellowing clippings book from my first years as a journo, but none of them are online anymore.

But I still see one tiny piece of criticism all the time, from the one time I had my review used as a promotional blurb, on the back cover of the DVD for Taika Waititi's Boy. While nearly everything has gone streaming, I still see that DVD around all over the place (plus, I live in New Zealand, where everybody is into Taika's stuff), and still see a tiny piece of writing from 10 years ago all the time, and I feel a tiny bit less irrelevant in the world.

It's just a bit stink I never got a copy of the DVD for myself...
Posted by Bob Temuka at 6:11 PM