Ministry of Space: You made us monsters 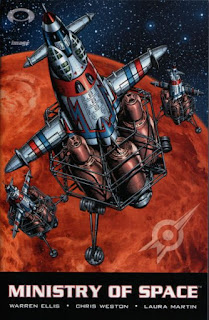 It's not the dark secret behind the funding of the Ministry of Space that really shocks in the final issue of this comic, it's a sign on the wall in the every last panel.

The Ministry of Space, produced with great care and respect by Warren Ellis and Chris Weston in the early 2000s, is the origin story for the world of Dan Dare, where space is ruled by the stiff upper lip of English culture. But it also shows that you don't build a space empire without some darkness, and that darkness really seeps in during the final moments.

The space programme is funded by stolen Holocaust gold, with England soaring into the stars on the backs of murdered millions. That's actually not much of a shock in the end, there have been enough dark hints about the source of the funding throughout the story, and the money was always coming from a dark place.

But then there's that sign at the end, showing that while humanity has reached the stars, it's still mired in inequalities and bigotry, and that all those hopes for a golden future will still be dragged down by these most human of prejudices.

It's the perfect note to end on -  after Weston's glorious spacecraft soar into the cosmos, and we see gardens on Mars and cities on the Moon, there is still something to bring you down to Earth.
Posted by Bob Temuka at 7:06 PM