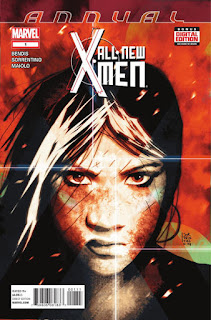 The Bendis era of the X-Men came to an end five years ago now, and the franchise have moved on in new directions. The time-displaced original team have been returned to their proper place, and the new mutants Bendis introduced during that period have been absorbed into the greater mutant tapestry, and the X-Men go on.

And Eva Bell, the Australian mutant with the ability to mess around with time, was the best of them. Not just because she had the best hair and a terrific attitude to all the mutant madness, but because she had a life beyond the endless conflict between homo sapiens and homo superior, and tragically lost it all.

In one issue of Bendis' Uncanny X-men, she disappears from the story for a few pages, and comes back obviously changed - that hair has grown out, for one - and isn't the same person, carrying an extra weight that she refuses to talk about, and which she forbids the team telepaths from divulging. It was a small mystery in among the many subplots Bendis was juggling at the time, but in a pair of annuals released some time later, her story was finally told, with art from Andrea Sorrentino.

She's been to the future and lived a life of her own, getting married and having a child, and then it's all taken away from her. It doesn't really mesh with the greater theories of how time travel works in the Marvel multiverse, but it's still a tragic twist of fate, and Eva's life is ripped apart by it before she's dumped back where she started.

There has been plenty said about how Bendis left a lot of threads hanging when he left, but Eva's story is a perfect little note inside all that noise. She's now just another mutant in the giant Hickman masterplan, showing up for crowd scenes and plot devices, but that's okay. We've already seen the whole story of Eva of Eva Bell, or at least the bits that really matter.
Posted by Bob Temuka at 1:40 PM