Love and Rockets: It's not your hat 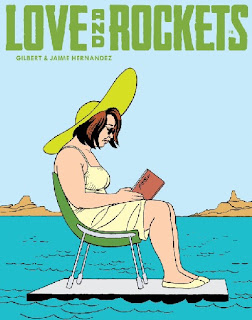 Jaime Hernandez has been building up his Locas saga in various Love and Rockets comics for almost four decades now, and the characters have grown up with the comic, becoming richer and deeper people as they go. The comics have a massive emotional punch because you know these characters, and you know what they've gone through, and you genuinely care about them.

And yet, he's also never been hesitant about introducing new and younger generations, and in recent years has brought in a whole new cast of younger characters, vaguely connected to the overall story. The most forthright of these has been Tonta - a loud, abrasive and hilarious young woman who

But when the two generations smash into each other in the most recent issue of the comic, that loud brashness of youth becomes something genuinely hurtful, and Tonta's brief interaction with Maggie - over a hat - is devastating for the older character, while the younger one walks away without a care in the world.

It all comes back to bite Tonta when she realises the connection between that random woman she accosted on the street and her art teacher, the immortal Ray D, and she realises that she's gone too far. She bails on the at class, and slinks home in shame.

But as somebody who has been following Maggie's story for years, there is only one side to this story, and I'm on Team Maggie all the way. Tonta has been a lot of fun, but she made Maggie cry, and frankly, she can go to hell. Maggie's age and character beats Tonta's youthful vigor and verve any day of the week.

Love and Rockets comics are still the best comics, because they make you care enough about these people that you actually get angry when they're poorly treated, even if it's from a brief exchange over a piece of headwear. That's good comics.
Posted by Bob Temuka at 7:00 PM