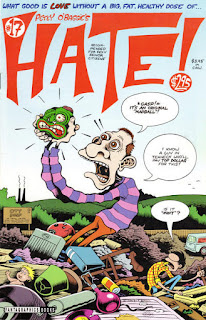 I was just slightly too young for the heyday of early 90s alternative comics, and was far more interested in the New Warriors and Justice League when comics like Eightball and Yummy Fur were at their prime.

So when I finally got to Hate, the comic had already moved on from the Seattle days, and #17 - the first one I ever got - Buddy and Lisa were in New Jersey, and moving their on with their lives

Even though I was new to the scene, I couldn't help seeing that Peter Bagge was getting the usual bullshit from those who told him he'd sold out by going colour with the comic and settling the characters into domesticity, instead of focusing on Stinky and his efforts to manage a hip young band in the rainy mists of Seattle.

But this issue, with Buddy heading back to Seattle to sort his shit out before heading back to the East Coast forever is always the pure Hate to me. That's where I came in, and all the Seattle stuff was prologue. Besides, the colour Hate comics has stronger connections to the earlier Bardley stores in Neat Stuff, and there was some deep resonance of Buddy back in that crushing suburbia, after trying to escape it into the world of plaid and grunge and over-priced coffee.

That's the real Hate, right there.