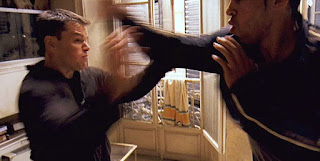 The shaky-cam could be one of the worst thing to happen to action films in the 21st century, used as a lazy short-hand to infer wild chaos, and to cover the hopeless inadequacies of the actors involved, when you can barely see them land a punch.

But it can be very different in the hands of a truly talented director, and it's always a little disappointing to see the Bourne films lumped in with every other film that uses the shakes as a crutch, because all shakes aren't the same.

When Jason Bourne unloads on some poor fool, there is certainly a lot of chaos, but it's also surprisingly easy to follow when Paul Greengrass gets stuck into it. The camera is all over the place, but it also lingers a split second longer on the vital details that you need to know. And, crucially, there is a huge amount of effort going into the sound design, which also helps makes things immeasurably more coherent.

Nothing really beats the thrill of a locked-off camera taking a step back, and just indulging in the sight of some hardcore action from talented performers. But like any film-making trick, shaking things up can be a powerful tool when used properly.
Posted by Bob Temuka at 7:19 PM