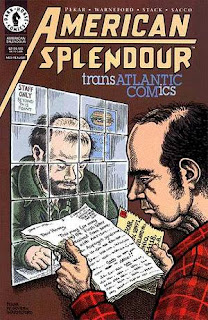 Of course, this led to a lot of smartarses pointing out that despite the vast possibilities of the comic medium, Harvey did a lot of stories that were extremely limited in scope. There were mostly drawn from his own ordinary and dull life, and while he could go anywhere in his comics, he often just stayed in the hallways of the veterans hospital where he worked.

But he also could do things like this single issue, mostly made up of a letter from British artist Colin Warneford, explaining how his life with autism worked, and how he dealt with the crippling social anxiety. Warneford, who also illustrates the comic with a detailed and groovy line, sees comics as a way to fully articulate all the things he's trying to say without tripping over his own thoughts, and does so admirably in this comic.

Transatlantic Comics was published more than 20 years ago, but is still as honest and true as ever, and just as vital - autistic people still get a lot of grief for the way they interact with the rest of society, and could still use a lot less judgement and a lot more understanding.

Harvy Pekar's American Splendour comics could be clumsy, and they could be boring, but they were always, always full of truths.
Posted by Bob Temuka at 6:36 PM