Miracleman Apocrypha: It's more than my job's worth, innit? 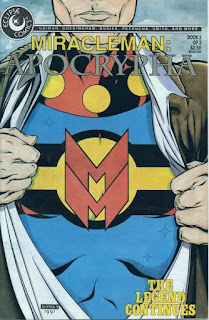 By the end of Alan Moore's run on Miracleman, the world had been transformed into a new super-utopia, with new beings building a whole new world on the ashes of a destroyed London. It showed  that the impact of superheroes on the real world would be profound and severe, but could also create a world of wonders.

Which is all well and good, but somebody has to still clean the bloody toilets, don't they?

Miracleman: Apocrypha was a three-issue series put out in the dying days of Eclipse Comics, giving a variety of creators the opportunity to tell stories in that world. And most of them are ponderous and pretentious, as they try to ride on Moore's coat-tails

But the second issue also had The Janitor, by Dick Foreman and Alan Smith, which was anything but ponderous. It's all about the poor bugger who has to clean up the palace of the new world, sweeping up around the anti-matter portals and shining up the massive nipples on the gold statues that coat its edifice.

Humanity might be ascended, and nobody ever needs to work, but some people still like to have the routine, like to have a bit of purpose, and are happy with the small miracle of seeing a regular caron the road, and won't fall for the charms of the evil Anti-Janitor, hiding away behind its dimensional gateway.

Sometimes, when everybody else literally has their head in the clouds, the man on the ground still has something to say.