A future worth looking forward to 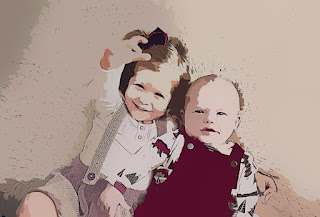 I'm always rubbish at year-end lists, because I always get into the good shit long after all the cool kids have moved on. But my little lady's first superhero word was Batgirl this year, because my pal Nik gave her a plush Barbara Gordon, and the best part about that was when we went to a store the other day that has some Batman toys and I pointed them out, and she legit cocked an eyebrow and said 'Bat..... Man?!?', like the concept was totally insane, and all I know is that was better than any movie, film or TV show I saw all year.

Look, it's been another horrendous year for a lot of us, and let's all hope things get a bit brighter in 2022. The end of the Western calendar year is just an arbitrary point to start over, but fuck, we have to start somewhere.

I got through 2021 okay, even if it is a hard lesson to discover that two kids are a million more than one. But they bring more joy into this world than anything I've ever seen before, and that's always worth celebrating.

I desperately don't want to mold their minds into just liking the same things I like, because it's more fun if they have their own thing, but I'm going to give them all the chances in the world to find out what it is. This past year has been rough, but that's my future. I'll see you there.

Posted by Bob Temuka at 5:03 PM No comments:

The year in movies

For the first time ever, I actually made a list of every single film I saw this year - it's a lot easier when you can just make notes on your phone - and it turned out I watched exactly 254 movies in 2021. I know I would have watched way more during the period in my life when I was all about the movies and nothing else, but that's a reasonable number, I think.

A lot of those 254 films were trash - cheap and nasty action films are often all I wanna watch at four in the morning when I'm trying to get our new arrival to sleep. But if I had to pick a favourite film I saw this year, it was Lover's Rock by Steve McQueen, which said so much with so little actual words. Although I also had weirdly huge emotional reactions to Adopt A Highway, a little film about Ethan Hawke dealing with society after decades in prison; and to The Matrix Resurrections, a little film about how kung fu is cool and love conquers all.

But by taking note of every single film I saw this year, I did find that out of the 254 films I saw -

* 26 percent were movies I had seen before

* 9 percent were prequels, sequels or remakes

* a paltry 4 percent were films that were not in English

* 2 percent were movies actually seen in the cinema. (Even without a pandemic, getting to the movies is fucking hard right now, man.)

While I don't have many regrets over watching all these films, I do wish I had seen more movies of quality, and that's got to be a goal for the next 12 months. Unless the kid starts sleeping better, in which case, movie time turns into sleeping time, and I'll probably end up watching 12 films all year. I can live with that trade-off.

Posted by Bob Temuka at 4:09 PM No comments:

This is still the Tearoom of Despair: Writing about comics

Posted by Bob Temuka at 3:15 PM No comments: