None more zen than Mifune 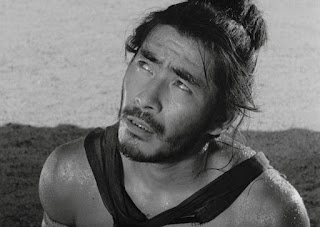 God give me the zen calm of the great Toshiro Mifune in the part in Rashomon where he's been caught, and is resigned to his fate and probably thinks he deserves it. And as the court hears part of the case against him, he stares up at the sky, soaking in the experience of life for a little bit longer, before they inevitably have his neck. There is still some harsh, barking laughter to come before that end, but that look up into the infinite is eternal

The only thing cooler than that is the way he scratches himself in the afternoon heat before the shit goes down.

That's the main thing I always remember from Rashomon. Other people might remember other things.

Posted by Bob Temuka at 7:38 PM No comments:

Give your eyes to Kyle


My oldest mate Kyle had a video channel where he talks about the comic books that he buys and loves with a beautiful and casual enthusiasm that always warms my cold dark heart.

He's super keen to get up to 1000 subscribers to his channel, and has been painfully short of the target for a while now, so if you do that sort of thing, and have some basic human decency in you, give him a subscribe.

It's the decent thing to do. He also won't stop telling you how great Carlos Ezquerra was, and that's always good for the soul.

Posted by Bob Temuka at 5:14 PM No comments:

I've been to the fuckin' Louvre and couple of MOMAs and I spent three hours in a slow-moving line to see Michelangelo's David in Florence and it was worth every fuckin' second, but there is also a sneaky part of me that think that Derek Riggs' Eddie the Head artwork for Iron Maiden is the finest art in the whole world. They definitely look the best on t-shirts. 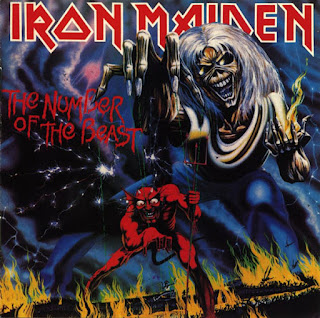 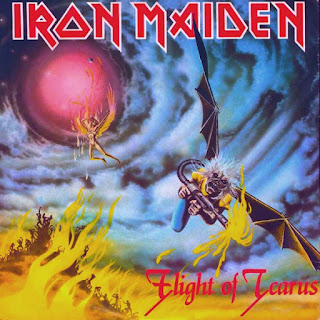 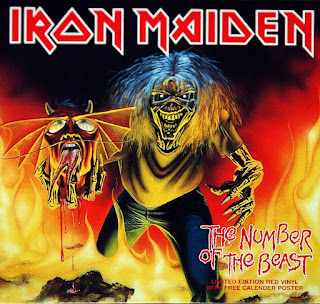 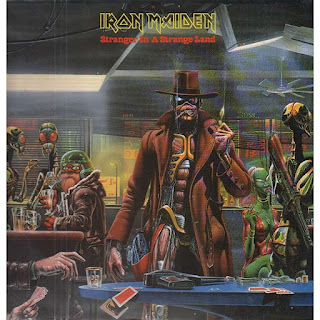 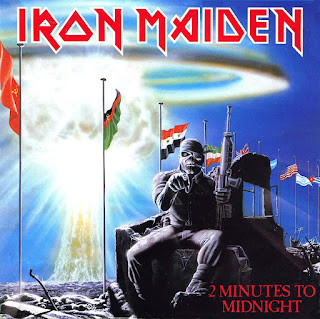 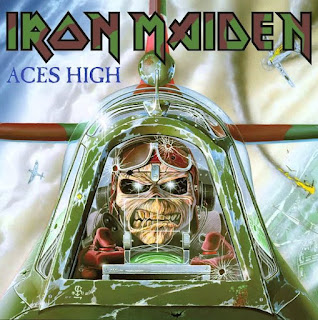 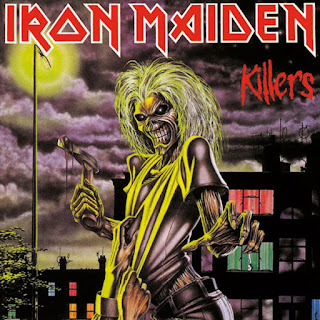 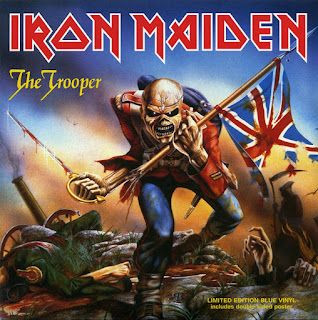 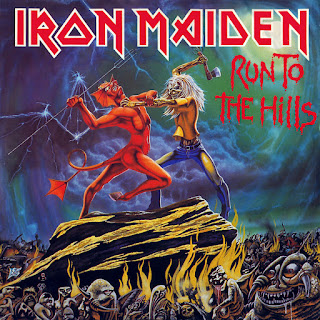 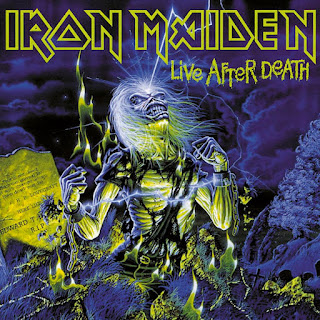 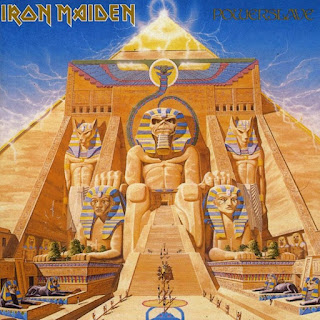 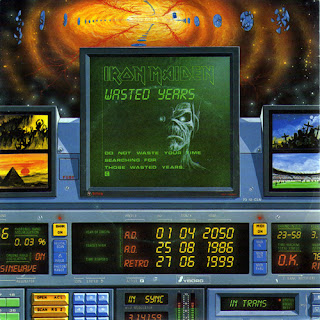 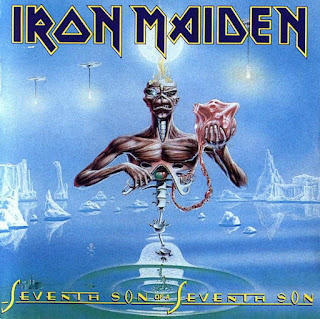 Posted by Bob Temuka at 7:36 PM No comments: 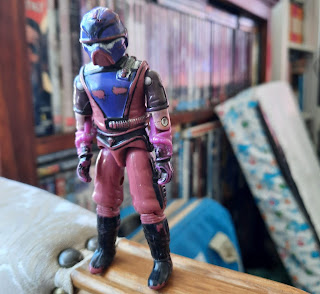 My two-year-old discovered the old lockbox the other day, and she's going to make me pay for it. It's the one made by my grandfather that currently houses all the still-complete action figures I have left in the world. She's not at an age where she'll try to eat them now, but I fear some of still them won't survive the experience.

She's really into the Princess Leia action figures that my sister had, and they're pretty robust for 40+-year things, but her favourites are the most delicate, even though they are clad in their battle armour.

Of all the GI Joe action figures I bought in the 1980s - and there was a fucking tonne of them - the only two that survive relatively intact today are the Cobra Commander in Battle Armor figure and a Techno-Viper. So of course they're the ones she wants to play with.

Not the half-dozen Iron Man figures I got at a toy store that was closing down in the late-2000s, not the cheap GI Joes that came out for one of those awful movies. She only wants to play with the ones I have an unhealthy emotional attachment to.

We got history, man. GI Joe stunted my growth. In 1987 I was 12 and ready to give up on childish toys after years of the limited playability of the Star Wars figures, and then the Cobra Commander was the most amazing action figure I'd ever seen in my entire life when I got it, and I was all about GI Joe for the next couple of years.

And the Techno-Viper, which I got a couple of weeks after that first one, has a scraped chest where I ran him across the edge of a swimming pool in the summer of 1989; the thumbs came off soon afterwards; and his foot is melted from when I got stoned and pushed it against an iron bar heater in the first flat I ever lived in. I know it's sad, but it's still true - my life is encoded in the Techno-Viper's scars.

As chipped and faded as it is, I think it's the bright colours of their painted armor that the kid likes the most. Or maybe the way they rattle around when she shakes them. Whatever it is, they've lasted 30+ years, and they might not last much longer. But the death of toys is inevitable, and if they have to go, they can go out in a blaze of little kid glory. Yo Joe.

Posted by Bob Temuka at 6:30 PM No comments: 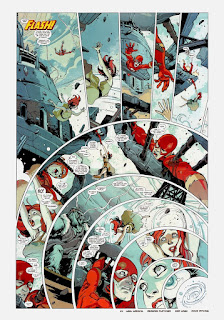 One weird and very particular disappoint from DC comics in the past decade is that there haven't been any more Wednesday Comics, because the one series they did do was so flipping great.

It was full of fun stories and magnificent art on a giant canvas. They didn't have a 100 percent hit rate, but that doesn't matter with an anthology that still gave the world so much big art from Kubert and Gibbons and Pope and Baker and Stelfreeze and Kerschl.

I didn't even need the nostalgia effect of the old-school adventure strip - I never had comic pages like that in any of the newspapers I ever read, you were lucky if you got some Peanuts with your Footrot Flats. But any kind of format that offers something different to the usual tiny and flimsy pamphlet is always welcome, and the best Wednesday Comic strips were a gorgeous spread across that huge page.

The stories are timeless, but the paper isn't. The physical copies I got off the shelves when it was released have aged a lot in the 12 years. They're already going a particular shade of yellow, but they're as pretty as ever. I just really, really wish there was more of them.

Posted by Bob Temuka at 7:25 PM No comments:

We've all turned a little Pink


Everyone has had to go through some kind of lockdown time in the past couple of years, stuck inside your house for the greater good. No wonder it's so much easier to sympathies with Bob Geldof's Pink in the movie version of The Wall, with the same walls closing in and you can't go out, because you've got nowhere to fly to.

It has really felt that way sometimes and it's okay to admit it. We're not all rock stars strung out on hard drugs in the hotel room, tearing it apart and cutting our nipples off, but there is a part of us that feels that same way about being stuck in this place.

Humans haven't changed that much since the film was produced, and do need to get out. We can all go a little crazy, binging on old war movies and organising your little cell in your own grand design. You don't need to go full fascist in your head like Pink does, but there is nothing wrong with a little bit of self pity. It would be weird if you didn't feel that way sometimes.

The coronavirus is still fucking out there, but we can all get jabbed up and go out and break down that mental wall a little bit.  I think I'll abandon the Pink way of thinking and go for Flex Mentallo's advice to just get out of the house instead. It seems like a better deal all around. 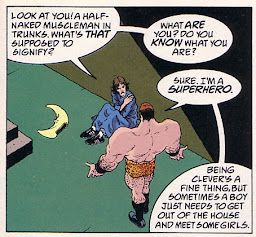 Posted by Bob Temuka at 6:17 PM No comments:

Mysteries inside the grab-bag 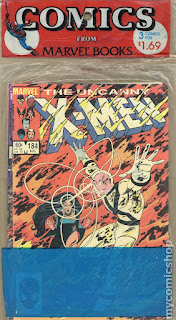 They were a proper gateway drug, coming in little plastic bags and offering up thrills that could be endlessly chased.  I haven't seen them around for years, but they used to be everywhere. They would show up in corner stores, and in supermarkets and and toy stores and service stations and cafes. I don't know who put them together or where they came from, but they really were everywhere

It would a bag of 3-5 comics, all packed together in semi-tight plastic, stapled at the top, often with a cheap piece of cardboard holding them together. Sometimes they would be all DC or all Marvel, but other times they were a mix of all sorts of American comics. Remaindered and unwanted copies, flogged off in bulk, and filling shelves all over the goddamn world.

They would be full of the most random stuff, and that was such a plus. I got one for the Uncanny X-Men #219 that was on the outside, but also got the unexpected last chapter of Batman: Year One with it - and it was my first ever exposure to Frank Miller's dark knight. The X-Men comic is long gone, but it must have made an impression because I could remember the issue number without looking it up, and because the bit where they actually consider killing Havok is the weirdest fucking thing.

I've still got that issue of Batman, and still remember how beautifully confusing it was, and how much that Mazzucchelli dude could do with so little.

I also remember how infuriating it was when the plastic was too tight, and you couldn't quite see what was lurking on the inside. The comic they put on the outside was a gimmee, but if you really wanted bang for your buck, you didn't want to get stuck with Star Comics or Harvey book or something. I spent so much time bending them in just the right way to see what was lurking on the inside, so that I got at least two decent comics out of the three.

One thing I can't quite recall is when I last saw comics for sale like this. Sometimes you see them at comic specialty shops, doing that sort of thing in some retro way, but haven't seen them out in the wild in the general stores, not like they used to, not since the direct market swallowed up everything.

But I have to wonder how many discovered new and intriguing comics through the three issue grab bag, and how many other people tried something they would never try because it came free with a new Superman comic.

This is how the gateway works. That's how they get you.

Posted by Bob Temuka at 7:32 PM No comments:

Possibility is a private party to which I'm no longer invited


My lovely and kind wife likes to often quote this gorgeous sketch from the Armando Iannucci show in my general direction, which she thinks is never not funny.

I'm actually four years part the age when I become useless to society. I need a small beer.

Posted by Bob Temuka at 5:11 PM No comments: 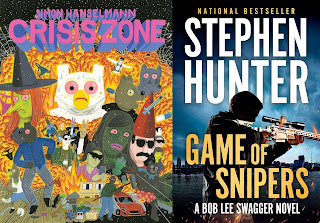 Fitting more reading time into my life isn't easy at the best of times, but the libraries just reopened, and I picked up 16 books the other day, so I got to work it out.

Posted by Bob Temuka at 4:18 PM No comments: