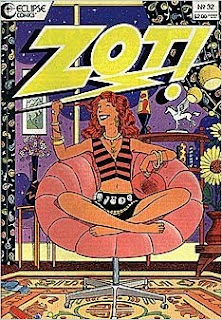 Scott McLoud's Zot! comic became a lot more interesting when the main characters became earth-bound towards the end of the ongoing series, with the stories becoming deeper than the usual manga-infused madness that dominated the first two-thirds of the comic.

There are two issues in particular - one where one supporting character grapples with her sexuality, and one where the two main characters spend the whole issue discussing their virginity - which got a lot of attention (and some awards) at the time, but they haven't aged all that well, and do come across as more than a little naive and clumsy to a reader in 2020.

But #32, a spotlight on Brandy - a happy-go-lucky character who is always cheerful and optimistic - hits just as hard, 30 years after it was published.

Brandy's life is a lot more complicated than it looks, and she's dealing with genuine hardship that even her very best friends are aware of - they often remark about how she manages to stay so thin, without having any idea it's because she's genuinely malnourished, giving up meals to keep her siblings fed. And when her boyfriend sells his old X-Men comics to fund a memorable date for her, she's just appalled that all that money is being wasted on her, (although as McLoud's wonderful expressions make clear, the chocolate ice-cream does help her feel a tiny bit better).

There are no easy answers for Brandy's predicament, the rent is still due and the food cupboards are still empty at the end of the issue, and her friends are still ignorant to her plight. But it ends on a delightful little note, as the teenager climbs on an empty playground, convinced she'll always look young, because she knows she always has, and that's good enough for now.