Baird's Bookshop was the best bookshop 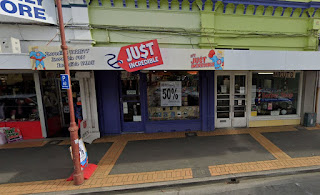 At least 10 percent of the comics I still own have the price in New Zealand dollars, scrawled on the front in ballpoint pen by a particular bookshop owner many, many years ago. There's even still a couple where I tried to use Twink to blank out the prices in a dire attempt to clean them up in the early nineties, but there are still dozens and dozens of them that still have that 1980s price.

That's because my primary source of the vast majority of my comics for many years was a small bookshop in a tiny town on the arse end of the world, and thank goodness for Baird's Bookshop in Temuka, because it was a vital part of my comic book life.

The comics would always arrive every Tuesday, several months after they had gone out on shelves in the rest of the world. There was absolutely no direct market stuff, and the price written on the cover, but it was much better than nothing.

It's the place where I got 2000ad for seven years straight, and every issue of Excalibur, right up until it became a comic shop-only deal. Every week there would be at least half a dozen issues of various things, and while it could get maddeningly random - the first issue of the Legion of Super-Heroes spin-off Legionnaires appeared, but nothing after #1 - it was a reasonably good source for regular issues of the X-Men or Captain America or Adventures of Superman.

They were all returnable, and the unsold comics would disappear after a month, but sometimes the comics would stick around and could sit there for years, and I remember seeing one of the very last reprint comics put out by Federal Comics - an Australian publisher who were everywhere in the Antipodes in the 1980s - still sitting there, well into the nineties.

I had a lot of respect for Mr Baird, the bookshop owner, and he delivered the goods for many years. When I went though a regrettable and thoroughly shameful phase of shoplifting comics as a teenager, I never stole anything from him, and it wasn't just because the comics were on a shelf right in front of the counter, or because my big sister was good friends with his daughter (it was a very small town). I just could never jeopardise that arrangement.

The bookshop is long gone now, replaced by a bargain bin shop years ago. The last thing I ever bought from there was an issue of 2000ad sometime in 2002, and the store faded away not long after that. But I'll never forget that ongoing thrill of walking in the door every Tuesday, because every week there was always some comic goodness waiting inside.
Posted by Bob Temuka at 4:37 PM