Never getting around to Crumb 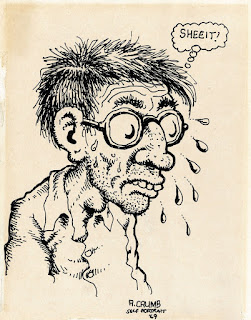 There are so many great comic books in the world, and so many great creators, it can take a while to get to things. Some corners of the comic world - especially in the non-English circles - are a complete mystery to me There hasn't been a day in the past 40 years when I haven't read some kind of comic book, and I still feel  ridiculously uninformed about a huge amount of comics.

And Robert Crumb's work is definitely a huge blind spot. By the time I got old enough not to be freaked out by his comics, I never could find his books anywhere. I saw the Crumb movie when it came out, and I read a few of his comics - the Kafka book he illustrated was absolutely terrific, the Short History Of America is straight-up brilliant, he did the best Phillip K Dick comic strip ever and his Book of Genesis from a few years back was lovely. But I just don't think I'm ever going to be taking that deep dive into his work.

It's not just that it's problematic as fuck, although that hardly helps. It's just that I'm not that interested in a lot of the things he has written about. The weird sex might have been truly transgressive back in the 1970s, but now feels forced and obvious, and the same goes for his greater points about modern society. I get that his comics about Bigfoot fucking dudes in the ass is a great big metaphor for the ills of civilization, but I still just don't want to read stories about fuckin' Bigfoot.

It's not the art - that has been consistently beautiful for decades. His detailed scratchiness and big curvy lines are always gorgeous, and the caricatures and portraits he does of friends and strangers can be hauntingly beautiful. I thought that would be enough to pull me finally into the orbit of Crumb, but I'd still rather read a Mark Millar comic.

I'll still read some of his comics, but I can't see myself ever getting into the whole thing. Life's too short and there's too much else to do.
Posted by Bob Temuka at 3:52 PM