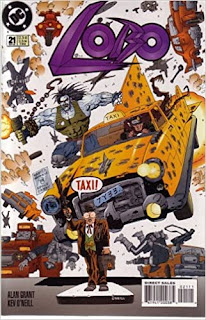 The entire American comics scene always seemed a little baffled by what to do with Kevin O'Neill when he came over in the great wave of British comic talent in the 1980s. His skills were so obvious, but was so jaggedly idiosyncratic that he never fit in. And he always went a bit too far with the violence and body horror.

It was just too extreme, and other than a Green Lantern story here and there (which has still somehow influenced the past decade of GL comics), he was usually far more comfortable with things like Marshall Law, the League of Extraordinary Gentlemen and Death Race 2020.

Which is a shame - because after the mighty Simon Bisley - he's the perfect Lobo artist. The best Lobo comics are the most extreme, that lean heavily into the appalling horror and gore of the Main Man's antics, with no level of restraint. And Kevin O'Neill does not deal in restraint.

O'Neill only did a couple of Lobo comics - a one-off that took the merciless piss out of of comic conventions - and #21 of the ongoing Lobo comic, co-starring 1950s favourite Space Cabbie.

And it's unflinchingly disgusting and violent and everything that Lobo comics should be. There's grotesque guts and deeply unsettling architecture and Lobo grinning like a true psychopath and things that literally defy description.