Starting with a Thriller 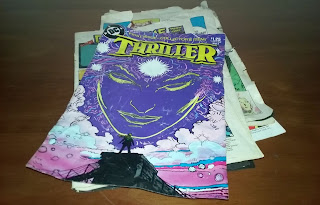 In years to come, when my young daughter is all grown up and reading her own type of comics on some kind of computer made out of water and good intentions, she'll ask me what was her first ever comic book was, and I'll tell her proudly it was the first issue of Thriller, the 1980s DC comic by Robert Loren Fleming and Trevor Von Eeden.

Anybody who has no idea what that comic is about is not going to get an explanation here, because Thriller has a lot going on, but I can tell her that she thought that bright pink cover was the bomb, and the heavy paper and heavy colours inside the book were all she wanted to touch and examine and rip to fucking shreds.

It was in my pile of things to sell, but I'll never get rid of it now. Partly because she fucking destroyed that comic - ripped it to bits and chewed on its innards. She still stared at the pages intently, and it proved useful when she got grumpy at life, because it was an oddly calming experience for the young one. The comic lasted in mint condition for nearly 40 years, but it couldn't survive an eight-month old.

So I can't sell it, because nobody is going to buy it in that kind of condition, but also because it's the first I ever really gave to the baby. She's always been reaching for them as I read them, but I like to keep my comics in generally one piece, so I'm always pulling them away. And then she went for the Thriller, and I let her have her way with it. It only seemed fair.

I've always been a totally sentimental piece of shit, but it's not like that is going to go away as both me and the baby get older, and this poor demolished comic is the ultimate symbol of that.
Posted by Bob Temuka at 4:33 PM