Lazarus Risen: He was so much more impressive last time 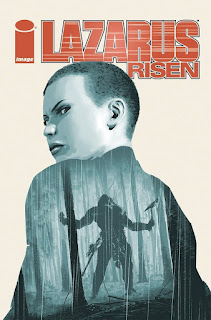 There's something hugely satisfying about the way writer Greg Rucka deal with the Zmey - a monster warrior that has already massacred thousands -  in the creature's rematch with Forever Carlye and Sonja Bittner in the third issue of Lazarus Risen. The last time these pumped-up supersoldiers all faced off against each other, it was carnage and despair, and the rematch promises more of the same for one side or the other.

Instead, the brutish monster is left disorientated and confused, and finally treated as a pathetic creature, destroying his will rather than his body, and regarding him as nothing to worry about, and something to be ignored. They just walk away.

The only disappointment is that Michael Lark - one of the great action artists currently working, with a sense of pacing and blocking out of scenes that is almost unparalleled in American comics - doesn't get to get stuck into the action, but it's worth it for that swerve of the unexpected.

The next issue of the current Lazarus series came out before the whole world shut down, and I could be way off with the way this thing is heading, but it's great way to deal with the Zmey. That's how you deal with this massive metaphor for toxic masculinity - diminish it, don't give it any power, and get on with your life. Walk away and let it eat itself.