Getting extremely judgmental about the Hellblazer 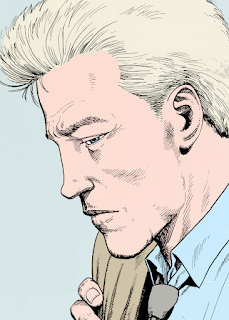 Even though I have only bought the very occasional John Constantine comic in the past decade, I still have weirdly specific and strong opinions about Hellblazer writers. My own thoughts about who got the character right, and who got the voice and tone of the street level magician's life. What they do with Chas, and the quality of the new characters they bring. How they deal with the First of the Fallen.

I only have these feelings about the first 300 issues of the John Constantine: Hellblazer, and have absolutely no opinion beyond that (with one notable exception that I'll get to). A lot of his time mired in superhero nonsense seemed to involve Constantine firing magic power blasts out of his hands, so can easily be ignored.

But Hellblazer was one of the series that I fell hard for, just at the right age for that kind of street level magic fantasy bullshit, and that kind of dark affection doesn't fade.

Garth Ennis was just getting cracking with his run with Steve Dillon when I was making that dizzying graduation from superheroes to more mature worlds, and it was everything I wanted in new comics for a while. Ennis was sickeningly young when he was doing this comic, just a couple of years older than me (he still is, the bastard), and the comics are occasionally clumsy. But they were also solid in the way Superman comics were not, not matter how buff Clark got.

There was always a lot of terrific artwork, right throughout the series, but Hellblazer eras were always defined by the writers, and I can recall even the most mediocre era by the regular name on the script.

Delano was a solid start with flashes of brilliance, while the one-offs by Morrison/Lloyd and Gaiman/McKean brought the right kind of energy at the right time. Elllis skidded out before he got going, (although that banned issue was still a fucking terrible comic, even with Phil Jimenez doing his beautiful best).

Most of them weren't great. While the shorter one-offs were tasty, Jenkins' big arc did nothing new; Azzarello and De Mina were admirable attempts to get away from eye of the British white guy, but there comics were filled with wrong. (At least you got some Corban art with Azzarello's dull prison riots, and the comic rarely looked better.)

Carey was dull and was around forever, Diggle was slightly less dull and disappeared surprisingly quickly. The final Milligan run is hideously underrated, with some very British horror, and John back on the streets getting his hands dirty. There is some brilliant Bisley art, a solid ending that offered no easy answers, and even Constantine's creepy relationship with Epiphany paid off.

There have been a couple of relaunches since then, and I read most of them through the library, and honestly couldn't tell you anything about them. I could tell you how much I was freaked out by Winnie the Pooh's appearance in a Delano issue I got 30 years ago, but I can't remember anything about the last few volumes.

The only time I've bought a comic with Constantine in it was when he showed up with a sodding space helmet on his head in one of the Six Pack comics that Ennis likes doing every few years. That was all right.

There was almost a return to some kind of form with the recent Simon Spurrier run, which had a definite vibe of its own and felt modern in the way Constantine comics really should, so of course it got fucking cancelled, and the building momentum of the comic was forced to come to a dead halt.

It's entirely possible that Constantine's future is in original graphic novels or short minis, like the recent effort by Tom Taylor and Darick Robertson, which felt a lot like some old school blazing of hell. His monthly adventures might be over for good, but at least we'll always have those first 300 comics, no matter how diabolical some of them got.