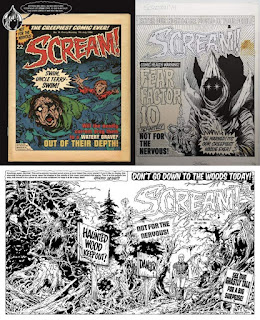 Writing about the comic books you really, truly loved when you were nine years old is the easiest thing in the world, and boy, did I love Scream! comics in 1984.

They weren't big or clever, but they were very stylish, and had some of the moodiest and gloomiest art in 80s comics. I wrote about them for the new NeoText Review site, who were kind enough to accept my ramblings and published them here.

There was only 15 issues of the comic, and I still could have written another 10,000 words about Ghastly McNasty's face, and how the sheer blandness of Terror of the Cats gave it an unpredictably unsettling mood, or how the dumb comedy of Fiends and Neighbours was an essential part of the mix, but that's the way it goes.