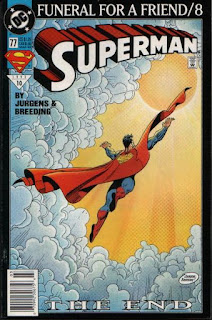 It might seem stupid in hindsight, but those few months in the 90s when Superman was dead - like, properly dead - was the last time I genuinely didn't know what was going to happen next in a major superhero comic I was following.

All I had was the next issue box at the end of every issue, and they were suddenly full of 'There is no information about Superman #78' and shit, and I had nothing. No access to comic magazines, no conventions nearby and certainly no internet. I found out comics were cancelled by seeing that they had disappeared from the subscription forms in the back of issues, and the Marvel Bullpen and DC editorial pages were a primary source of information.

So even though the whole Death of Superman thing had been such a monumental event that it was talked about on One News At Six on television, once he was buried, I had no idea what was coming next. There were no clues.

I had been getting all the new Superman comics I could get since I'd fallen for the Panic In The Sky storyline a year or so earlier, but there was a good couple of weeks there where it felt like it might all be over. That there was no more Superman.

I'm not even sure when I learned they were bringing them him back in the form of the four new pretenders, although I'm fairly sure it was an ad in an issue of the Flash comic, which was my other big DC obsession of the time. It can't have been very long after Funeral For A Friend part eight, but it had been a little while of glorious cluelessness.

It was the last time I was really in the dark, and would be almost impossible now. It was nice while it lasted.