All the Way back with CBR 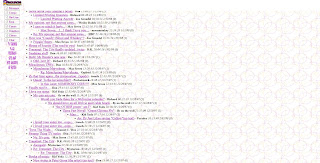 Our digital history fades so fast. The memory hole caused by the internet (and general human laziness) starts somewhere in the late 90s, and is well entrenched in the 21st century. Just try finding out something about a single comic published in 2007. When everyone shifted from print to online, they never realised that everything they were doing would disappear into dead links and lost servers.

I chase the past as much as anyone, if only to see what I looked like, intellectually speaking. My generation was the last to grow up without digital cameras, so there's very, very few photos of me in my misbegotten youth. Part of me is always grateful for that, because holy fucking shitballs is that an embarrassing time in your life.

But I do still jump on the wayback machine every now and then and try to find the first things I ever did online, and can find some remnants of the the message board posts at Comic Book resources when they still had that purple and orange speech balloon wallpaper and I called myself Max Seven.

I've found a couple of message titles, usually hanging out on the Vertigo board with trench and pocketwatch and a bunch of other cool cats, and there's something about Signal to Noise and the Invisi-mobile and Miracleman, and cut me some slack, dude, it was 1998.

I can't see what we're on about, all you can see is the message titles. So it goes - the vast amount of messages are lost, just gone, so much faded away, and thank goodness for that. There have been hundreds of thousands of posts at comicbookresources.com since then, and they're almost all gone, and we're better off without them.

Still, I do worry about fly on the wall.

But taking a little glimpse at this time never hurts. Remembering what comics inspired you enough to talk about this nonsense with complete strangers on the other side of the world. Somewhere there is still a picture of that summer of 1998, when anybody can see a public diary of the stupidest tastes and a desperate need to connect with the world. It's still there.