Shooting Steve Martin in the leg 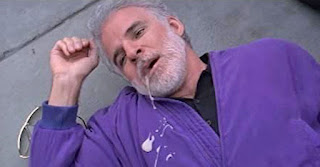 Nobody really remembers Grand Canyon - a ridiculously middlebrow examination of race in 90s America from Lawrence Kasdan - because there isn't much to say about. It was another in a long line of films that mine a very particular kind of white modern liberal guilt about race in an embarrassingly ham-fisted manner.

I saw it years ago, and couldn't tell you much about the plot, but there's one tiny bit of brilliance that is hard to forget, and it's when Steve Martin gets shot in the leg, and goes into total shock, in the way people actually do when their bodies suffer extreme trauma like that.

After a decade of 80s action films where a bullet that wasn't in the head or chest could be shrugged off, it's genuinely shocking to see Martin piss himself with pain. Martin plays an action movie director who makes that kind of bullshit, and has a brief epiphany that maybe his work should better reflect reality, but it lasts as long as the piss stain.

There's a time and a place - every John Woo film would be unendurable if people actually react to being shot like human beings do - but it's still jarring to see that kind of terrible reality getting in the way of the usual gunplay.