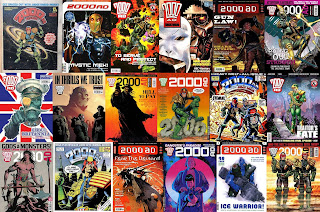 I could not overestimate how much 2000ad is tied to my life. The comic started a few years after I was born, so it has always been there, week after week, year after year. I've been getting it regularly for about 3/4 of my life, for longer than any of my friendships.

It's more than just the exact memory of what shop I got a large number of them from, (even with 2000+ issues, I can remember where I got a disturbing amount of them). It's entire phases of my life, living in different towns, working in different jobs, living different lives - it's all there, encoded in the weekly schedule of a British science fiction comic.

I know exactly where all the earliest issues I owned came from, the ones I craved and hunted out as a kid and found in dairies in Ashburton and Waimate and Pleasant Point. All that adolescent obsession is caked on the decaying paper, and the issues are literally starting to fall apart because I read them too many times.

And later, there are exact issues that pinpoint the moment I moved on with things - that's the last one I got before we went off on a six-month trip around the world, and that's the one I got when I came back and moved to Auckland in late 2007, (and haven't stopped again since). There's the last one I got from the world's best bookshop shortly before it closed forever.

And the ones I got overseas - reading the last chapters of Day of Chaos and Nikolai Dante in a frnachise cafe off Shaftsbury Ave in 2012, getting the issue with the Shaun of the Dead strip from Jim Hanley's Universe on in New York, and the one issue I really needed with the Nemesis cover that was in a beautifully messy store in central Dublin. The massive fucking pile that nearly drokking killed me walking from a Sydney train station to my sister's place.

There are sharp memories of reading issues at jobs they I quit decades ago, and in cafes that don't exist anymore. All this life, tied to these comics, these pages, these panels.

There are also entire eras of my life are there in a 30-issue run of progs, major life changes swirl around latest Dredd mega-epics and the Rogue Trooper reboots. I grow at roughly the same pace as Carlos Ezquerra's coloring evolution.

There was an 8-year gap that took me , so 1996 progs mix with 2003 memories when I try to match it up, but it's been a straight diary since that 2007 issue. Life changes, homes where this ridiculously massive pile of comics were stored and reread are abandoned for new flats.

I've been doing another prog slog, going through the past 20 years, which usually just means reading all the Dredd and Dante, skimming Sinister Dxter and hoping for the best with the rest. Not even bothering with Necrophim or Space Girls, but giving the 10-Seconders and Zombo some proper consideration

And it's all there, every gruddamn issue I go through, a dorky record of my life, written in an invisible vocabulary that only I can read. A life in 2000ad.