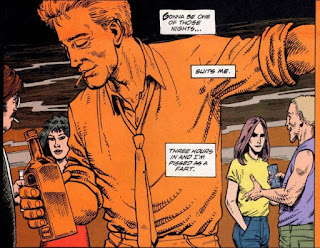 I'm only a few years younger than Garth Ennis, and when he took over Hellblazer at a disgustingly young age in the early 1990s, I was only just behind him. And after enjoying his work in Crisis and 2000ad, I loved his John Constantine, in a way I never did before or since.

Ennis' Constantine was a complete bastard, whose use of magic was more subtle than it looked (it's always total cringe to see stories with him firing bolts of magical wank energy out of his fingers), and the writer was out to impress with his first big American comic, throwing in loads of gore and daft jokes and young man philosophizing.

It was also one of the first grown up comics I was able to get regularly, and while those comics haven't aged all that well - and the age of the writer has become more painfully obvious - they're still a lot of fun.

Alan Moore said Ennis could be great writer if he ever got out of the bloody pub, but that focus on socializing outside the usual apocalypses also had a huge impact on this particular reader, because I was also at that age where you go to the pub all the fucking time.

When most stories were being very good, and telling you that getting drunk was bad and wrong and you should just calm the hell down, Ennis was writing stories that said that sitting around with your mates over a few drinks and talking complete bollocks was actually good, and actually had some merit.

He was riffing on writing by some great alcoholics like Dylan Thomas and Brendan Behan, but it was the sort of thing that struck a chord with the young man I was, searching for any kind of connection or community, and you could find that down the pub, if you stepped over the puke and avoided the people fighting on the floor. It was a place where a young adult could go and find comradeship, and loosen up a bit, and when John Constantine was telling how how fucking grand it all was, who was I to argue?

I don't drink much anymore, not because it ever became a problem or a moral issue, I just got fucking sick of the hangovers, and can't lose a whole weekend to feeling like shit. I certainly gave up long before Constantine ever got rebooted back into a character who was more likely to hang out with a Batman than a barman, but reading those Hellblazer comics now reminds me of it all, and takes me back to that perfect pub experience, which I spent a lot of my youth chasing. Your round, John.
Posted by Bob Temuka at 6:27 PM