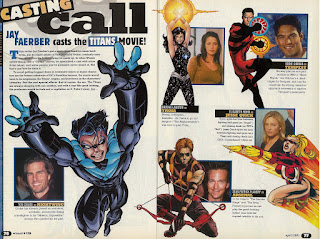 Wizard Magazine always had, right from the start, so many dodgy articles and editorial decisions, and it could get properly infuriating because there could be genuinely interesting news, reviews and interviews about the world of comic books, buried by frat boy humor and the dumbest nonsense.

But even the price guides and focus on collectability served a purpose, because it was a glimpse into a world I never had anything to do with. When you don't give a shit what your comics are worth, it can be like looking at the scene of an ultra-slow slow-motion car crash, as geek tastes and definition of hotness change by the month, and people get loaded down with a bunch of worthless Stephen Platt comics.

So while that was always fun, the casting call articles were the worst wastes of space in every issue, because they were always so basic and so obvious, and the wrong choices all round.

There was clear thinking that because Steve Rogers is blonde and stacked, this blonde, stacked shithead from some NBC cop show should be Captain America. And Tom Cruise was a popular choice for all the wrong reasons, and would have been a truly terrible Nightwing.

There's also a very dated tendency to rely on some specific actors when talking about characters with diverse ethnicities, which really is as cringe as it sounds.

There was the odd suggestion in the hundreds that came true, but there was certainly no great hit rate, especially when it was a no-brainer like Patrick Stewart playing Charles Xavier. And it was all so needy - nerds may have won in the end, but when the best the comic geek could hope for was the Roger Corman Fantastic Four, the casting dreams were blatant grasps at mainstreaming.

It still the most basic and boring discourse, and still see it all the time, including outside the rarefied air of comics. Anytime there is a new Doctor Who coming along, it all goes insane with every English speaking actor with a spark of wit rumored to be taking up the role, and have about as much accuracy as those fucking Wizard possibilities.

Even though the entire Marvel movie series is built on a bedrock of individual actor's charms, all the predictions about who they're going to be are worthless. And some of them sit there in old and dusty issues of Wizards, little timebombs of uncool, waiting to blow up in your face.

(All that said, the next Doctor Who should absolutely be Vicky McClure, and nobody would be a better Bond than Dev Patel.)