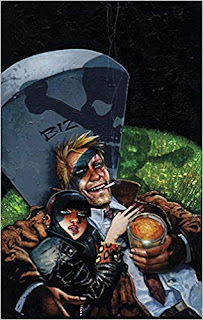 In the long publishing history of the original Hellblazer comic, there are only two runs that I've ever really been interested in - the Ennis stories, which remind me of a drunken past; and the Milligan issues that close out the series.

Almost everything in between, including some longer spells by various writers, leave me cold. Warren Ellis started off strong, until he told Vertigo to go fuck itself, and the other eras are a decidedly mixed bag. The Jenkins, Diggle and Carey comics were perfectly fine, but not that exciting, while the Azzarello and Mina stories were straight-up awful.

But the Milligan comics didn't feel like anything else, and provide an excellent capstone to that particular John Constantine. There is still somebody with that name running around in DC Comics, but it's not the same person.

With beautiful, gritty art by Giuseppe Camuncoli and Simon Bisley, Milligan's comics are far less episodic than previous Constantine tales, building up to tell one long story of John's final adventures before the reboot. Milligan's wicked humour, as sharp as Constantine's tongue, shines through on the stories, but the stories are more grounded in a grimy reality than usual, even with world trips and small apocalypses and demon attacks.

The biggest move was making Constantine a married man, hooking up with a strong, independent woman who was also half his age, which the character was mercilessly ridiculed about. But Epiphany more than held her own against her new husband, proving just as tough and merciless when needed, but also providing a unique perspective that her older and jaded lover couldn't even consider. Constantine's wider family were also an integral part of the whole thing, especially his long-suffering niece Gemma, with a new nephew (who may actually now be the same Constantine who has been running around with superheroes for the past decade) taking up the family curses.

There were still werewolves and suicide bridges and Shade the Changing Man and a final page that posed a lot more questions than it answered, but under the discipline needed in work-for-hire on a corporately-owned character, (see also his fucking fantastic Batman comics with Jim Aparo in the very early 90s), Milligan delivers the goods, with a brilliant end for a brilliant character.