The TARDIS is just a door 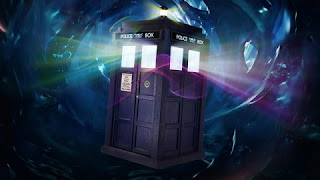 There's a idea about Doctor Who that's been sitting in my head since I used to sit on the beach, drink cider and read brand new New Adventures novels in the cold Dunedin sun, .

It's that the TARDIS is just a door, and the rooms inside stand still in their own perfect little dimension and all that power is just about putting that impossible door into impossible places. That door, hiding in the mundane form of a police box, is the only thing actually moving around the universe.

It's an idea that can be easily refuted with many examples from Doctor Who stories of the people in the control room being directly affected by events outside the spaceship. But this is Doctor Who, you just explain all that away with a wave of the hand and some bollocks about a temporal tsunami or something and move the heck on, because that's what Doctor Who does best.

And there's something about the purity of idea in a magic door that takes you away, anyway you want to go. Especially when you're young and totally smashed on the beach, long ago on a winter afternoon.