Wrestling with the Superstars 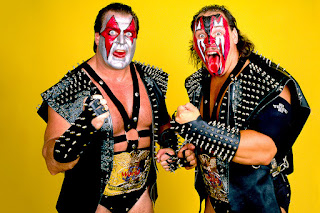 Teenage obsessions burn so brightly and usually fade away just as fast, but they can leave behind a lingering fondness that does no real harm. I don't really love old X-men comics and zombie movies as much as I did when I was 13, but I still love them all the same.

And I still have an absolute loyalty to the late 80s WWF wrestling that will never, ever die.

There had always been wrestling on the TV around here. In the days of two channels in New Zealand, 'On The Mat' was huge for a decade, bringing in overseas stars for bouts with local talent. But that was squeezed out in the mid 80s when they couldn't get international wrestlers to come over to the arse end of the world anymore, and there wasn't any wrestling for a while.

The growth of the WWF and the way it gobbled up all the regional circuits was a large reason for New Zealand promoters failing to secure that overseas talent. And then they started showing WWF Superstars of Wrestling on TV2 and fucking everyone was into it.

The Superstars show was almost entirely full of the big names beating the living crap out of the poor jobbers, and all the big events took a long time to show up at the local video store. If you were lucky, someone might have a sixth generation video tape copy of the early Survivor Series that you could borrow, but most of us had to wait for Wrestlemania IV to show up on the shelves at Video Ezy (in a two-tape set, because video tapes could only hold so much power).

And fuck, it was fun. Moments like Demolition fighting each other at the start of the 1990 Royal Rumble (and then taking on the big man Andre) -

- or the Rockers showing up and blowing everybody's minds.

I never cared much about the big guys like Hulk Hogan and the A-listers, it was always a little disappointing when guys like Brutus the Barber Beefcake and Randy Savage made the leap to the big time and lost some of the allure, and started to drown in their own hype.

Me and my mates got in trouble at school for clotheslining each other, but nobody ever seemed to understand that there was just as much fun in coming up with outlandish and elaborate wrestling identities, and we spent way more time on the trash talk and figuring out our entrance music than we did actually hurting each other.

But then we figured out we could do moves in the swimming pool at the house we were renting, and it was a lot easier to pick each other up and slam them down when you're in a five-foot deep pool. We would record our rants into the tape deck, then bash each other around the pool, and we beat the shit out of the pool, it was an over-ground thing held together by sheet iron and plastic and the whole thing literally fell apart when I threw Anthony or Kyle into the side once too often.

That kind of white hot obsession never really lasts and while it was It was all-consuming for a little while, most of us quickly tired of it. The tedious Hogan v Warrior fight in Wrestlemania VI was about the end of it, which meant the whole craze rose and peaked within 18 months.

Apart from the utter joy of getting totally ripped and playing eight-man tag matches on the PS2, that was as far as I ever went with the wrestling, and missed out on the era of The Rock, Cena and Austin, and whoever they've got going these days.

And I know it gets bad, I've seen the documentaries, especially the addictive Dark Side of the Ring. A lot of those man mountains have died of weird heart attacks and brain embolisms and getting shot in the back of the fucking head. The horror of the Benoit story and the infinite sadness of the Von Erich family show that there was real pain behind the smack-talk

(Although the one where there is acknowledgement that the guy died doing what he loved - and make no mistake, he LOVED hookers and cocaine - has a kind of zen brilliance.)

But shit, when you're 13 and these huge musclemen are hurling themselves around, it's the most amazing thing in the world. I'm still coasting on that high.