There are Carnage regrets, but at least I've got Hercules 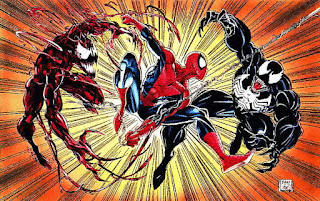 Periodically purging the comic collection is always a great idea. You can always sharpen things up a bit, and sort it all out. Get rid of all the nonsense, get it out of the house, and maybe even make a bit of money out of it.

I try not to have too many regrets about things I don't have anymore. There is a small part of me that wishes I hadn't given up all of John Byrne's Alpha Flight comics so easily, but there's a much bigger part that remembers that a lot of it was really, really boring.

It's better this way, the quality of the thing is far higher in my wistful reminisces than in cold, hard reality. I'll probably be reading those Alpha Flight comics again at some point in the future, and there is absolutely no chance it will be as exciting as I thought it was when I was 16.

I really did think it was really fucking exciting when I was 16.

That said, I do regret selling all those comics where Carnage first showed up for a couple of bucks each in the late-2000s. I had three or four years worth of Amazing Spider-Man comics from that era, and even though I was - and still am - an embarrassingly large Mark Bagley fan, I needed to slim things down, so the near-mint comics went out for door for an absolute song.

But now I see what they're going for and I realise that if I'd held onto them for another decade I could have made proper bank. I could have bought a new fucking car with those issues now.

No, I had to hang onto all the Bob Layton Hercules comics instead. That was a much wiser investment, by Zeus. I could probably get five bucks for both miniseries if I tried. Thanks for that, Prince of Power.