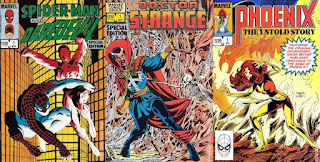 Like anybody who has been reading comic books for more decades than they'd like to admit, I have some high-faluting ideas about the best comics ever produced. My own thoughts about the individual issues and series that are the pinnacle of comics, and their ultimate form.

It's something I'm still searching for, but there is a part of me that thinks I found it years ago in the deluxe 'special edition' reprints that Marvel put out in the early 1980s. Sometimes they were beefed up with new material, but the main things is that they were printed on that lovely baxter paper that made the regular newsprint look like garbage (even if the actual printing wasn't always up to that lofty standard).

They were bright, chunky things, double the size of a regular issue, with some truly terrific artwork. Some were one-offs, others are several issues long, and when trade paperbacks were a rare thing, these issues were sometimes the only way to find these stories. 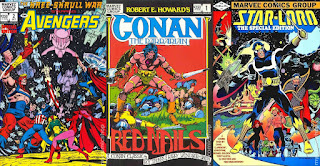 There were weird specials like Phoenix: The Untold Story, which told the real story behind the original death of Jean Grey. The Byrne/Austin art never looked so slick and dynamic as it did in this bright color, and there was some invaluable glimpses of the creative process with a roundtable interview with everybody at the end of the comic.

There were also reprints of some of Marvel's biggest stories over several issues -the bombastic Kree/Skrull War covered in a couple of issues, Giant-Sized X-Men #1 got the full treatment and the entire Elektra Saga required four issues to fit in all the ninjas and deep emotional dynamics. 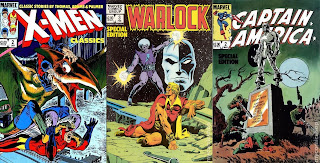 But mostly they were all about the art - this is where you could find some of Steranko's Captain America comics or Frank Miller's earliest Daredevil comics without breaking the bank, or all of Barry Windsor-Smith's Conan: Red Nails epic in one place.

There were a couple of Kull comics that showed off the extraordinary talents of John Bolton and John Buscema and a Doctor Strange one by Engleheart/Brunner (with a terrific Bernie Wrightson cover that leaves you wanting so much more Doctor Strange comics from the artist),

There were the Adam Warlock and Captain Marvel comics by Starlin; some Fantastic Four which mashed some classic Kirby with some pretty average Byrne; a bit of Sienkiewicz Moon Knight; three issues of the Neal Adams X-Men and a one-off Star-Lord with some bonus Michael Golden.

It was just a handful of the very best comics Marve had produced in its first couple of decades - it's a bit shameful there isn't much Kirby and no Ditko comics in this lot, but it was a good dose of Marvel's best. 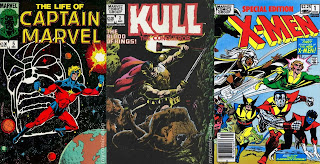 Later on the format was used for special one-off originals like the first Spider-man v Wolverine comic, and the bright and bulky package was used to incredibly lucrative effect in Jim Starlin's Infinity Gauntlet comics.

And now all these comics remain in print in some form or another and nobody needs these kinds of issues anymore.

But the solid package of these special editions, with that sharp paper and great fucking art, make them one of the best formats I've ever read. 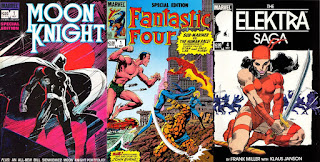 Great stuff. You mention no Ditko, so in case you're not aware, the Ditko Doctor Strange run can be found in 4 glorious Baxter issues.