All the Shade in the world 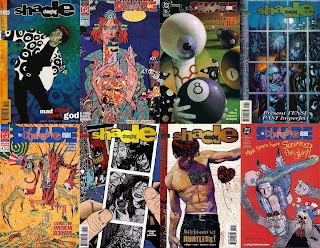 I can't remember where I first came to Peter Milligan's Shade The Changing Man comics. It was somewhere in that terrible, glorious rush of 90s Vertigo, and was probably a story in one of the anthology books they put out at the time. By the time I got to the actual series it was almost over, and I only bought a few issues brand new. But I decided to try and get the series, or as much of it as possible.

That was about 30 years ago and it was only last week that I finally got the last issue I needed in the 70-chapter story. I hunted Shade down in back issue bins literally all over the world. I dug my first issues out of the $1 bin at Bag End Books in Dunedin, got a couple of key issues at a sweet store in Stockholm during our last big overseas trip, found the first dozen issues for 50c each at the gloriously messy Comics Kingdom in central Sydney, and bought the last four issues I needed from mycomicshop.com, even though that's cheating.

It's arguable that this was the best way to read it, in bits and pieces. It doesn't matter if you're missing vast parts of the story and if there are years and years between the completion of storylines. It's not hard to figure out how things work out. Shade is all over the place, Cathy is dead and alive at the same time, Lenny is always Lenny, and you don't miss the Chris Bachao art for long, not when you keep finding entire issues of his gorgeous artwork..

I'll get back to you, once I've finally seen how this story of Rac Shade and his unfortunate interactions with Earth was actually meant to go down.