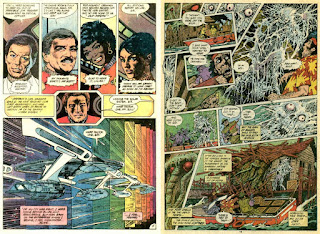 Even though I was reading both comics at roughly the same time, it took me years and years to work out that the Tom Sutton who drew the Star Trek comics in the 1980s - with the excellent likenesses, solid uniforms and insanely large engines, computers and navigation arrays - was the same Tom Sutton who drew the Man-Thing series for writer Steve Gerber in the Marvel Comics Presents weekly comic, with intricate detail and shaky foundations, and rot and mosquitoes and gross fungus.

The Man-Thing feels more pure Sutton. He did the inks for most of it, while his Star Trek work was given a very clean tidy-up by Ricardo Villagran. But months after he finished his tour of duty on the Enterprise, he was drawing every rotten fly and zit and captured the stink of the bayou in the MCP serial. Sutton - who used his art as a way to stay off the alcohol - could be so down to earth he was getting into the mud, and he could also soar to the fucking stars.

I was just reading some of that recently... I think that story is overlooked when talking about Gerber and Man-Thing as well as Marvel Comics Presents.