They can't all be the best comic ever 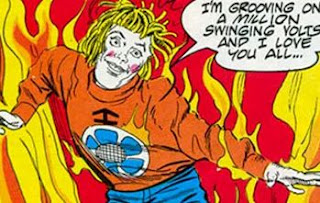 Through the local library, I've been getting a lot of trades from the big comic book publishers, catching up on old favourites and trying some new stuff. And while there is some pleasant variety, they often have one thing in common - their covers are over-run with worthless garbage quotes, telling everybody how great the comic is.

Modern comic book design is already so cluttered and busy, but they some still find room for absolutely worthless quotes, from websites that nobody goes to unless, they want effusive and insubstantial praise for everything. There is so much enthusiasm for comics that are teeth-grindingly average, you can get a quote from anyone.

When the back of the Watchmen book had quotes from the New York Times and shit, that might have convinced somebody to stump up for the book, but is anyone really convinced by a quote from comicbookasskissers.com that the latest Warlord reboot is any good.

Does that really work? Do these things make anybody buy them? Or are the quotes just there so that the creative and editorial teams feel good at night?

Speaking as somebody who is still quite chuffed at getting a quote on the back of a DVD, they don't even offer the quote-generators a name-check, they're just credited to the website, and who can remember which writer wrote which piece of insincere flattery.

It's part of the insecurity of comics - that feeling that the medium doesn't deserve a seat at the literary table, and have to constantly brag about how great they are, to get any attention.

At least when prose novels do it, they use organizations you've heard of, or authors with big audiences, but these quotes mean nothing, and just show off how self-conscious comic books still get.
Posted by Bob Temuka at 6:26 PM