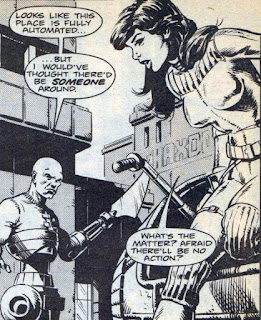 In the early issues of Warrior, there is a clear favourite for the readers. There is obviously a lot of love for the Alan Moore stories, but judging by the letters page, there is an easy winner - it's Laser Eraser and Pressbutton all the way. But that love didn't really last.

Written by the mysterious Pedro Henry - who turned out to be the extremely non-mysterious Steve Moore - it featured sharp art from Steve Dillon in a sprawling universe in the far-future. Sci-fi mega-assassin Mysta Mistralis and incredibly violent cyborg Axel Pressbutton get into a lot of sexy shenanigans among the stars, and while the stories never really held together, (and could be just plain mean), they were certainly never predictable.

You can bet Steve Moore's brother-from-another-mother Alan Moore contributed a few ideas for kicks when they smoked spliffs together, because Alan was there at the start, writing and drawing the misadventures of Pressbutton for a huge audience in mainstream music mag Sounds. His Kurt Vile work would be more suited for Zap Comix than something you would find in 2000ad, but the enthusiasm for Axel and his vicious chopper carried on into Warrior.

Steve Moore's stories were usually more fantastical and metaphysical than this effort, but the writer obviously relished the chance to fill the duo's adventures with weird sex and sudden death. While that certainly got a lot of readers excited, it was undoubtedly Dillon's art that was primarily responsible for the early raves. It had a hard edge that was eventually buffed out by endless boring Wolverine comics, with art so sharp you could cut your face on it, and the young Dillon went full-tilt on his design and action staging, while never forgetting to keep the story full of cute faces.

And yet, while Pressbutton got those raves, it quickly faded away after a brief foray into original American stories. While Marvelman and V For Vendetta are still in print today, there hasn't been an Axel Pressbutton comic since a spirited effort in the early 90s with Martin Emond. The deadly duo's adventures were short and sharp, but the thrill only lasted about as long as the orgasms sparked by Axel's button.
Posted by Bob Temuka at 6:57 PM