I don't need no key issues 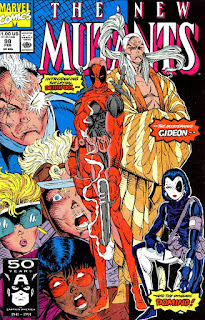 My best mate has gone through a comic surge in recent years that is kinda breathtaking. We both grew up reading British weeklies and graduated to X-Men comics at the same time. He kept up with all things X, and has now almost achieved one impossible goal of getting all of the original X-Men comics - he's only 11 away from the lot - and is now fixated on key issues of many, many other titles.

I say good luck to him, and he's certainly picked up some blinders after making a lot of US mates on YouTube in the past five years. But I also say fuck the whole concept of key issues - as always, I just want to read the bloody things, not invest in the fuckers.

There's no denying that key issues of certain comic books can be a decent investment, and the drive to collect the first appearance of someone familiar from the movies will almost always pay off. If you have the first Spider-Man, it's going to be worth more than any first appearance of any other Spider-character.

But sometimes the whole idea of first appearances gets a bit ridiculous - despite my local comic shop's hopeful note, I seriously don't believe that Swamp Thing #50 is the first appearance of the Justice League Dark, and I powerfully don't care if a cameo counts.

But now there is a weird drive to artificially create key issues with new characters, hyping them up as the Next Big Thing, even if they're just a tired rehash of the same old ideas. The big comic book companies used to be overflowing with all new concepts and characters, throwing a whole bunch of ideas at the wall and seeing what sticks, now they're just slamming Hulk and Wolverine together and calling it a day.

I seriously don't care about the Joker's new girlfriend, and tehn I couldn't get the new Legion of Super Hero comics because it got snapped up on the hype for some new Green Lantern bullshit. Being unable to find an issue of a comic, six issues into the run, because some YouTuber said it was a hot book, is a great excuse to stop buying it altogethe. So that worked out well.

I used to tell my loved ones that my comics weren't just boxes of paper under my bed, they were investments, because I was trying to explain the obsession with all things comic book and everyone understood the money side of things.

But it's never been about the money, and when the obsession with key issues just gets in the way of actually the reading the things, it's not paying off for anybody. Unless they've got the first appearance of Wolverine or some shit.
Posted by Bob Temuka at 4:50 PM