We've always been this awful 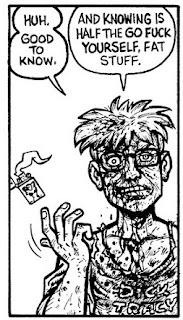 Nerds - in all kinds of fandom - can be fucking awful human beings. Social misfits trying to make everybody as miserable as them, using the excuse of geekdom, and the terrible idea that they're the real victims in their latest deluded fantasy. There's some fucking awful racism, sexism, homophobia and transphobia going on every day in the nerd communities, and it's goddamn 20-fucking-20. We should be past this shit by now.

It feels like a modern thing, but it's always been there. It spreads a lot easier on social media than any device ever invented by humanity, and the anonymity of the internet give some shitheads extra reach, but there is no golden age of nerdhood. We've always been this awful.

Just look at old fanzines and professional magazines, full of terrible people with terrible opinions. Letters pages full of bile, and columns full of rage about unimportant bullshit, and desperate attempts to be childishly edgy by shitting on other people. This isn't a new phenomena.

At least we're gone that point were all sorts of prejudice are officially frowned on. Even if it's officially still all over the fucking place, some people can still face consequences for being gigantic fucktards. (Cancel culture is not a thing - you are still perfectly allowed to be a fucking arsehole, but other people are also perfectly allowed to call you a fucking arsehole for it, and decide that they want nothing to do with your arseholeness.)

But there are still sub-societies that thrive and live on as cesspits of shitty hate, and to see the odious ethics and small-minded hypocrisy of things like Gamergate spread into wider culture is deeply depressing. At least when nerds used to weaponize their own persecution to persecute others used to keep it in the fanzines and sub-cultures they inhabited, instead of spraying it all over the place. We've always been this awful, but we should be better than that now.
Posted by Bob Temuka at 6:00 PM