Warrior: Forward into the future 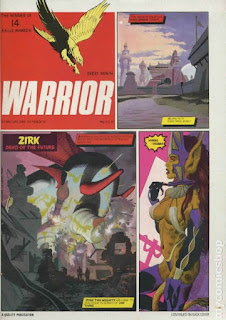 Warrior tried so hard to be an indispensable comic, but it still only managed a couple of dozen issues before dying out. It might have been the bullshit from Marvel, demanding the rights to a name for a character that somebody else came up with first (and then, decades later, owning the character and still refusing him to go by his original, superior name), and it might just have been so hard to hold onto creators offered more freedom and cash across the Atlantic, and it might just have been flagging sales. Whatever the reason, it was gone after #26

They're strange beasts - the final few issues - V For Vendetta remains a cornerstone, but Marvelman is lost in that legal mire and doesn't appear for quite a few issues before the end. There is an early Grant Morrison story that went exactly nowhere, and lots of other filler. While these include some terrific interviews with artists that get deep into their craft and influences, there is a hint of desperation to the final issues, even as the editorial pages still promise a bight future.

Of course, some of the stories continued, with both V for Vendetta and Moore's era on Marvelman coming to natural conclusions with other publishers. Mysa and Axel Pressbutton made the jump to American comics, although that didn't last long - and almost all of the creators were only just starting on the paths to long, productive careers.

The most obvious successor to Warrior is A1, where the mighty Gray Leach and his mates published new Warpsmith and Bojeffires comics, and got the best of British comic talents to let loose in six short (and endlessly reprinted) issues.

There might not have been the day-glo anarchy of Deadline without Warrior, which defined comics in a whole new way, a decade down the line, and 2000ad might not have eaten up Warrior in the way it devoured Starlord and Tornado, but it certainly followed Warrior's example.

That influence lasts so much longer than the actual comic, and the original hunger that drove Warrior in the first place doesn't go away, and wasn't confined to the British Isles. There is a direct line from Warrior to the birth of Vertigo comics, 10 years down the line, with similar motivations, and some fiamiliar names in the credits.

Even Vertigo has faded away now, and has joined Warrior in oblivion, but that hunger for smart, beautiful comics is never sated, and there will always be ambitions to follow in their footsteps.