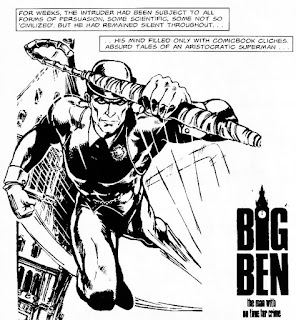 It's guaranteed that not every strip in any anthology comic is going to be a winner, and Warrior had its fair share of stinkers. They often featured beautiful art that was lumbered with incomprehensible or outright incompetent storytelling. Trying to reach outside your grasp should always be commended, but you also shouldn't be too shocked when you fall short.

So for every slice of Marvelman gold, there was Dez Skinn's interminable Big Ben spin-off, which wasted the talents of a young Will Simpson. For every Laser Eraser comic that hit the mark, there was an episode of Madman that was impossible to follow.

And there were still those desperate attempts to impress - Shandor started out strong, but collapsed into unintelligibility, and Steve Parkhouse's The Spiral Path got similarly lost, even as the artist settled into his distinctive loose style.

There were also a lot of cheap euro reprints, re-dialogued for English, but still utterly baffling. These padded out the page count, but Warrior was not the first - and was most certainly not the last - British anthology comic to show signs of a forthcoming demise with these kinds of reprints. It's never a good sign when the quality starts to slip.