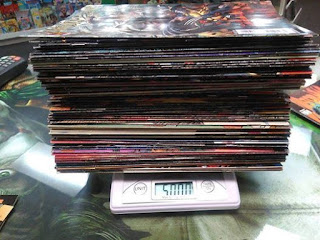 The comic book business has - like most of the world - been massively fucked over by 2020, and with shops in lockdown, and product coming out on a seriously random basis, I've barely stepped foot in a comic store in months.

But since New Zealand is run by grown-ups, we're now allowed to go out and be in crowds of people without worrying about catching something that will make us choke up our lungs. We can go to music gigs, and we can go to sporting events, and we can go to the comic shop when they have a kilo sale.

One of my local stores has been doing it for years now. They've given up on the weekly grind of new comics after getting sick of getting screwed around by the distributor, and now focus on the collector market. They buy up big collections in bulk for key issues, and end up with tonnes of old comics they don't really need.

So every couple of months, they do a kilo sale, where boxes of these old comics are put up for sale. They end up costing $20 a kilo, which usually works out at about a buck each. And there is some surprisingly good stuff in there, if you're not too bothered by the quality.

I've loaded up on 70s and 80s Star Trek comics and Avengers and Teen Titans and Doctor Who comics and issues of goddamn Quasar, all of which I'll end up selling again in the next year, but at least I get to read them first. I look for the sorts of things that you can't get easily from the library, and that makes them even easier to sell in the end.

Every now and then, you find some Strange Days by Milligan/Ewins/McCarthy - or a couple of Shade The ChangIng Man issues you need, but I also just like to load up on comics that would have blown my fucking mind if I'd owned them when I was 12 years old.

But I missed them, and now I churn through them at high speed and pass them on, because they're rubbish and fun and deeply, deeply comforting.

For bulk comic goodness, you just can't go wrong when your childhood dreams are sold off by weight.