Warrior: Feeding a hunger for the new 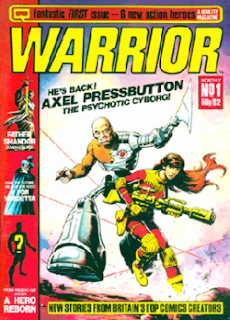 When British comic anthology Warrior started publishing in the early 80s, it set out to feed a hunger for something new and sophisticated in the local comic scene. And while the black and white comic magazine didn't last much more than a couple of dozen issues, that hunger never went away.

It was a hunger that saw readers latch onto Marvelman as a 'super-heroes done right' - which was sorely needed 20 years after the Fantastic Four debuted - and those readers were desperately keen for the sex and violence of strips like Laser Eraser and Pressbutton. Publisher Dez Skinn's eagerness to tap into this new enthusiasm lead to a bunch of clumsy comics, but even those duff stories are trying so hard, it's hard to hold it against them.

In fact, there is a palpable relief in the earlier letter columns of the comic - that somebody is trying to break away from the stale ideas that permeated many comics - and even those letters that slag off the actual efforts give Skinn and crew credit for giving it a go in the first place.

It helped that Warrior had a strong creator line-up, right from the start, which was certainly aided by giving them ownership of the comics they created. In those days, this was still seen as the path to comics excellence, before it all faded away when Image came along and had all the rights and still just did the same old shit as everyone else, only 69% more extreme.

The mainstream American comic publishers were stagnating at the time, and the thirst for something new wasn't confined to the UK. And while Warrior flared and burned out fairly quickly, it was one of the first signs that the 1980s were going to be a transforming time for comics, in a way that has never really been matched since.
Posted by Bob Temuka at 5:58 PM