So that's how Batman broke his back 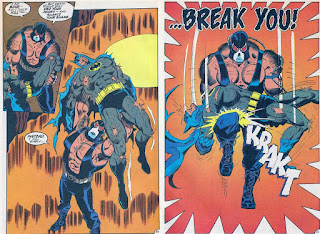 I was reading the monthly Batman comics as they led up to the Knightfall saga in the early 90s, but because I lived on the edge of the world, I missed some of the crucial issues - one of the first disappointments caused by Key Issues syndrome. I got the first couple of chapters and the big-ass Batman #500, where Azrael became the Bat, but never actually read the issue where the Batman's back was actually broken.

And even though that one of panel of Bats going over Bane's knee has been reprinted a thousand times, I only finally read that fateful issue last week, in the Tales From the Dark Multiverse hardcover collection that DC recently put out.

And it's surprising how little fight there actually is in it. At least the Batman in Dark Knight Rises puts up a few kicks and punches before Bane breaks him. But the 1990s Batman - who is far more fallible than the current version - is an absolute mess. He spends far more time thinking about the various exhausting battles than landing any blows, and the entire issue is Bane just kicking the fucking shit out of him. At least Superman took Doomsday out with his final blow, Batman just takes it.

Batman is a lot harder, and a lot less human, these days, and if they were telling this story in 2020, he'd put up more of a fight, or have some kind of contingency plan, (even if it all goes wrong). To see him just pummeled like this is actually awful. Who knew one of Batman's greatest battles could be so painful to watch?
Posted by Bob Temuka at 5:18 PM