How conspiracy theories work: The man with the umbrella 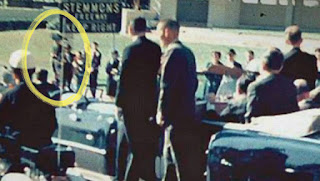 There has been a lot written about conspiracy theories in recent years, especially when there is an incredibly strong argument that they've made the world objectively worse in the past decade, but nothing so efficiently sums up the psychology behind them like the story of the man with the umbrella at the Kennedy assassination.

The question was asked for years - what was he doing? On a sunny November day in Dallas, there was a man seen opening an umbrella just before the bullets started flying. It was such a strange thing to do, there had to be an explanation, and it had to be connected to the assassination.

And then it turned out that there was an explanation, and it was just weird and mundane enough to be true, and had absolutely nothing to do with any conspiracy to murder of the President. The man with the umbrella was making some kind of point about the Kennedy family's appeasement of Hitler in the 1930s, with umbrellas seen as a obvious metaphor for political cowardice.

That symbolism faded over the years, but that's what the man was doing. He wasn't signalling that it was time for a second gunman to shoot, or to send a coded message to his Communist handlers. He was making a statement, but the statement got lost in the noise.

Errol Morris did a terrific little documentary film on this for the NY Times back in 2011, and a decade later, after years and years of having to constantly block loved ones on social media because they won't fucking shut up about 9/11, that film remains one of the best ways to defuse any conspiracy thought.

The truth isn't always hidden by some vast conspiracy, it's usually just human beings doing things for strange, or flawed, or just plain human reasons. Sometimes life is just as mundane as it is strange and people do fucked up things, and you'll never be able to predict them, because they're just boring and bizarre enough to be true.

Sometimes there isn't a vast cabal out to change the course of history, sometimes there's just some dude with an umbrella, making some vague point. That vagueness allows conspiracies theories to sneak in and fester, but life just works out that way.