Why I dig the Affleck 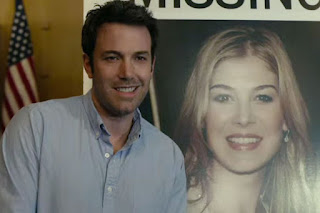 Not everybody is a Ben Affleck fan, and I can totally understand that, but he's one of my favourite modern actors for a very simple reason.

He is usually a conventionally good looking dude, especially with his jaw set and mouth closed, and he's another lantern-chinned hero in the grandest old school traditions of Hollywood. But then he opens his mouth and smiles, and holy shit, it's the creepiest damn '90s frat boy leer in all of cinema.

His best roles make full use of these two halves of Affleck, and combined, make him a terrific presence on the screen. It means his attempts to play the bland hero type are always a little bit doomed, but when he's trying to play the creep behind that grimace, he's exceptional.

There's certainly an argument that Casey Affleck is an even better actor - if only for the way he pulls off the scene in Good Will Hunting where he wanks into a baseball glove -  but he doesn't have brother Ben's statuesque juxtaposition.
Posted by Bob Temuka at 5:18 PM