Gangs of London: Die Hard in a Welsh farmhouse 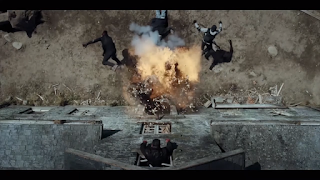 There's not a lot of action going on in the movie theatre right now, and most action films have gone straight to streaming for the past several years, even before the coronavirus pushed us all out of the cinema. But the gunfight in a Welsh farmhouse in the Gangs of London blew me away.

The self-contained episode, part of co-creator Gareth Evans' intense TV series, features a fight between a Danish murder squad and a group of travellers who just won't die, no matter how many times they're perforated with high velocity shrapnel, (and also happen to be in a farmhouse that is loaded with ammunition).

And as you'd expect from the director of The Raid movies, it's excellent - expertly choreographed, phenomenally intense and incredibly bloody, with bodies caught in an explosion literally falling apart in ultra slow motion. It's an insanely over the top sequence, with the invaders blowing in the roof and coming in blasting, with the interior of the farmhouse soon full of chaos and bloodshed.

The rest of the series has its moments - Sope Dirisu is fucking amazing as the main character, showing his soul as he caves in heads - but the farmhouse shootout is the highlight, and the best action scene of this strange, isolated year.
Posted by Bob Temuka at 7:26 PM